Although the churches at Waihi and Tokaanu have had a long history and a tradition which goes back to the early Mill Hill Fathers who came to the area as missionaries in 1886, the Church of St Joseph the Worker in Turangi has a much shorter history. It was built about 1966 to meet the needs of the thousands of workers on the Tongariro Power Development. Father Edward Slowey returned home to England because of illness. Father Frank Downs took his place and being a younger man, began a transformation of the Parish that has continued. Father Downs was called back to England when his father became ill, later dying of cancer. Expecting Father Downs to return, the Diocese supplied ‘weekend priests’ and the Sisters of the Mission kept everything else ‘ticking over’ in between times. On Sundays when no priest was available communion services were held.

In 1997 when it became definite that no Mill Hill priests were available, the Hamilton Diocese stepped in with a happy solution. A newly ordained priest, Father Robert Sharplin, under the Parish Priest of Taupo, Monsignor Pat Holland, would look after the spiritual welfare of the Turangi parishioners and also those in other neighbouring areas. Fr Robert’s commitments in Taupo and elsewhere meant a lot of travelling and adjustments had to be made in scheduling services. Mass was to be said each Sunday, on Fridays and on the third Saturday as well as on special feast days in Turangi. St Werenfrid’s, the Church in Waihi, had a mass on the fourth Sunday, while Mass was to be said in the Little Church at Tokaanu, St Mary Immaculate, about four times a year. Sister Rita took Catechetical instruction and saw to the other needs of the Parish, always with the backing and encouragement of Fr Robert. The Parish has been fortunate to have such an energetic, helpful and knowledgeable priest. For his part Father Robert considers himself blessed by being in a parish that is most interesting, very diverse, knows how to celebrate and has a distinctive spirit. 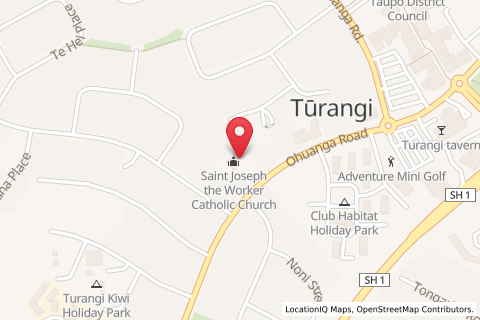