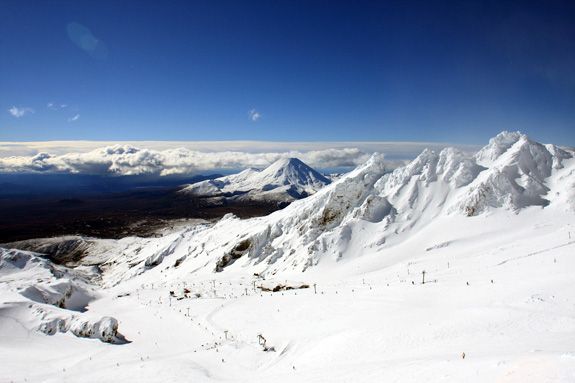 The snow season is from late June to early November. The largest ski area in the country, Whakapapa, is on the northwestern slopes of Mount Ruapehu.

It has 15 lifts, covering an area of 5.5 km². Directly next to the ski field are 47 ski club huts; most of them also accommodate non-club members.

A slightly smaller ski field called Turoa is on the southwestern slope. Though this field has only nine lifts, the skiing area, of 5 km², is almost as large as Whakapapa's.

There is no accommodation at the ski field and the nearest town is Ohakune. These two ski fields came under common management in 2000. Ski passes can be used on both fields, and a lift or run from one field to the other is planned. Beside these major ski fields, there is also the Tukino ski area, privately run by the Desert Alpine Ski Club, and the Aorangi Ski Club on the southeastern slope. It has two nutcracker rope tows, and covers 1.9 km².