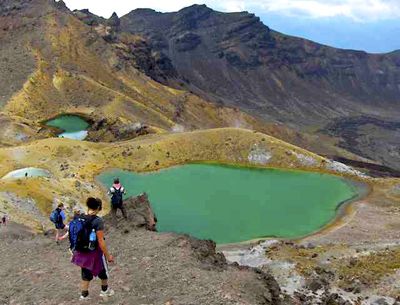 Lava flows; steam vents, emerald-coloured lakes and magnificent views combine to make this an unforgettable walking experience. Often described as one of the world's great one-day walks, the Tongariro Alpine Crossing is a challenging journey across a volcanic wonderland.

Beginning at Mangatepopo Valley near Whakapapa, the track climbs around old lava flows. The age of the lava flows can be judged by the way in which plants have established themselves over the years. Near the head of the valley are the Soda Springs where you can find yellow buttercups and white foxgloves growing in spring. The climb from the valley to Mangatepopo Saddle between Mount Ngauruhoe and Mount Tongariro is steep but you are rewarded with panoramic views that on a clear day can reach as far as Mt Taranaki.

The Alpine Crossing continues across South Crater and on up Red Crater. The smell of sulphur can be quite strong and a reminder that this area is still active. Red Crater marks the highest point on the Tongariro Crossing. A one and a half hour detour can be made to the summit of Mount Tongariro from this point. The track then descends to the water-filled craters called the Emerald Lakes. Minerals from the surrounding thermal area cause the brilliant greenish colour, the crossing then continues over Central Crater to Blue Lake an old volcanic vent. After rounding North Crater, the descent continues through tussock slopes and bush to end of the journey.

The Tongariro Alpine Crossing is weather dependant taking around seven to eight hours to complete. The track network (including the Northern Circuit) has campsites, Doc huts and the facilities at Whakapapa. The Tongariro National Park is well developed for tourism. There are also numerous shorter tracks appropriate for day tramps. Mount Tongariro and Mt Ngauruhoe and surroundings are one of the several locations where Peter Jackson shot the The Lord of the Rings film trilogy (Mt Ngauruhoe being Mt Doom). Tours to view these places are commonly arranged by tour operators and lodges.